On June 23, 1957, Rev. Douglas Moore of Asbury Temple Methodist Church led six young, well-dressed African-American students, five of whom are pictured praying here, into the segregated Royal Ice Cream Parlor. The group entered the “colored” entrance at the back of the restaurant and proceeded to the white section, where they sat down and ordered ice cream. The staff refused to serve them, and when they were told to leave by the manager, they responded by ordering another round of ice cream. The protesters were arrested and fined $10 plus court fees. Asked later about the incident by a reporter, Moore said, "We just decided we wanted to cool off, to get some ice cream or milkshakes."

Protestor Virginia Williams had this to say:

Moore sought the help of Durham lawyer Floyd McKissick, a prominent civil rights activist. The case was upheld by the North Carolina Supreme Court, and the United States Supreme Court declined to hear it on the grounds that the protesters’ rights had not been violated, since laws against their actions were on the books. In this photo, the protestors pray with Rev. Moore before going to court: 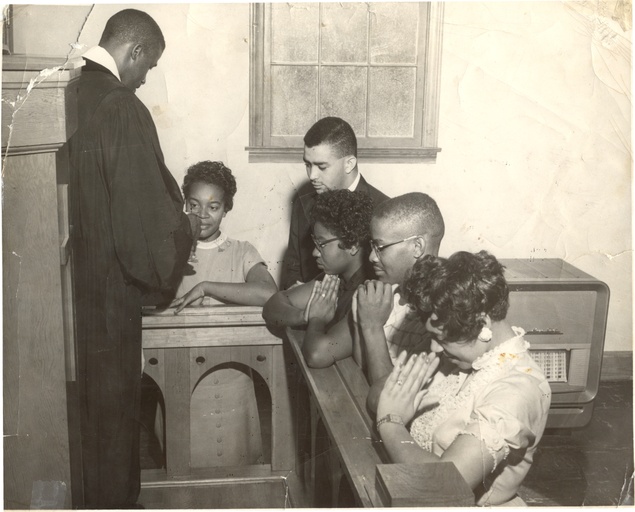 The Royal Ice Cream strikers pray before going to court. Participants included Mary Clyburn, Virginia Williams, Rev. Douglas E. Moore, Vivian Jones, Jesse Gray, Claude Glenn, and Melvin H. Willis. "It was exciting, because we went where we dared not to go. I wasn't frightened or anything of that sort because either way, we could have made history. If he had served us ice cream, he would have made history. But, by refusing to, I guess we made history!" -Virginia Williams, Royal Ice Cream Protester, 2003 Interview Source: Virginia Williams . Durham Civil Rights Heritage Project Collection (NCC.0040), North Carolina Collection, Durham County Library, NC . Photo ID: mss_0040_126

The Royal Ice Cream sit-in not only provoked controversy in the white community; it created a huge uproar among black citizens, many of whose members viewed the protesters not as freedom fighters but as troublemakers led astray by a radical young minister and an outsider. Although the sit-in did not get a lot of support, it did set the stage for future protests. It is documented that the Greensboro Woolworth’s protesters, who ignited lunch counter sit-ins throughout the South, knew about and were perhaps inspired by the Royal Ice Cream sit-in. By the time the 1960 sit-ins reached Durham, the views of the town’s black citizens had changed, with most being in favor of the protests.