Toppling of the Downtown Confederate Monument, 2017

On August 14, 2017, protestors in downtown Durham used rope to pull down the Confederate soldiers monument that stood in front of the old county courthouse. This protest was in response to the “Unite the Right” rally that had taken place two days earlier, during which a gathering of white supremacist, alt-right, Klansmen, and neo-Nazis occured in Charlottesville, Virginia. This event turned violent when alt-right protestors clashed with counter protestors and culminated in a white supremicast deliberately driving his car into a crowd of counter-protestors, killing Heather Heyer. 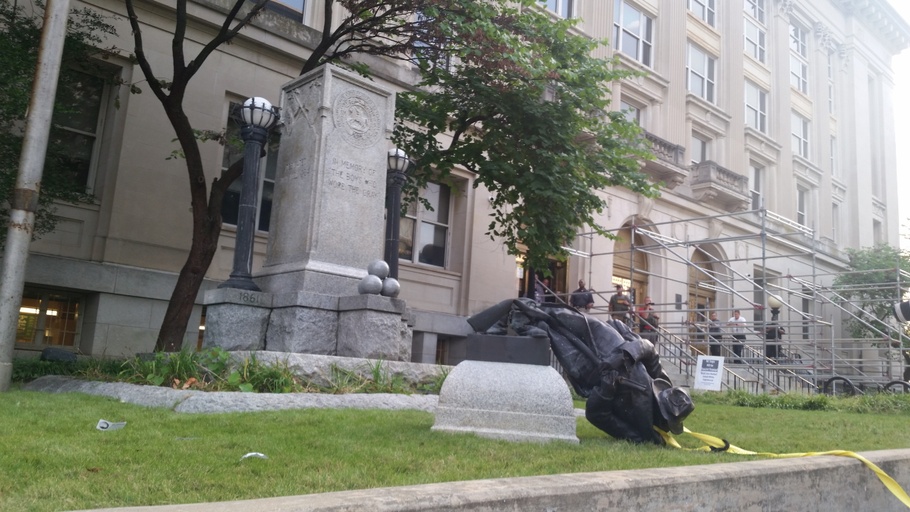 Seven protestors were arrested and charged. One defendant was acquitted and the remaining charges against the other six defendants were eventually dropped by the Durham District Attorney.

The Durham monument was dedicated in 1924 "in memory of the boys who wore the gray." Efforts to erect it were led by the R.F. Webb Camp of United Confederate Veterans and the local chapter of the United Daughters of the Confederacy. After its destruction, the Durham County Board of Commissioners and the Durham City Council established the City-County Committee on Confederate Monuments and Memorials. A series of public meetings were held in 2018 to gather feedback from Durham residents and a report that compiled the committee’s findings was presented to the City Council and County Commission on January 8, 2019. The recommendation of the committee was to display the statue in its current condition along with "interpretive text explaining its origin and the history that led to its fall" inside the old courthouse building. The committee also recommended that the City and County commission a new piece of public art that "incorporates the existing base and recognizes a more holistic understanding of the experience of the Civil War in Durham."