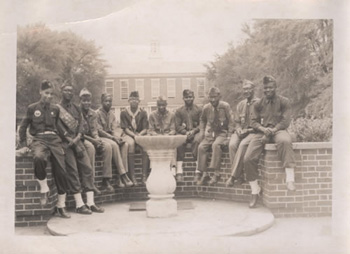 R. Kelly Bryant was active with the Boy Scouts and instrumental in bringing about full integration of Black scouts with white scouts in the Occoneechee Council of the Boy Scouts of America in North Carolina.

The first group of Boy Scouts in Durham was organized in 1910 at Durham High School. The first official chartered troop of Boy Scouts in Durham was Troop #1, which was organized by Sidney Turner, Frank Turner, and A. V. Satterwhite and supported by Julian S. Carr, Frank Fuller, and R. A. Bishop. The first charter for a troop of African-American Boy Scouts was received in 1932 for Troop 55, which was organized at Hillside High School. R. Kelly Bryant became active in Durham area Boy Scouts in 1943 as a neighborhood commissioner and member of the advancement committee for Durham County. In 1951, two scouts came to Bryant to ask him to serve as their scoutmaster for Troop 187 while they searched for a permanent one. He went on to serve as Troop 187’s scoutmaster for 37 years, until he retired in 1988, overseeing over 400 scouts during that time.

R. Kelly Bryant wrote a letter in 2003 succiently detailing his involvement in the movement to integrate the Boy Scouts in North Carolina.

Early in my scouting career I noticed that all white scout leaders were organized into “districts” (Durham District) and all black leaders were organized as “divisions” (Durham Divisional Committee) with no council-level recognition or representation. We were permitted to do scouting with the permission of the copyright owners endorsed by the local whites. We were assigned a black field executive whose position allowed him to go to the council office for instructions, but he could not attend council meetings or executive board meetings as did the white field executives. Our [Black] scouts could not go to Camp Durant, a council owned Boy Scout camp in Wake County.

Since the Boy Scouts was one of the three organizations chartered by the Congress of the US, I began expressing my concerns and served as the chairman of the Durham Divisional Committee from 1951 through 1957. We wrote letters, participated in many meetings with national, regional, council, and local Boy Scout officers, and others. We submitted a signed petition and kept the fire burning. I knew that the conditions we were enduring were a concoction of Region 6 of Boy Scouts of American (BSA) with its offices in Atlanta and serving NC, SC, GA, FL, and Panama Canal. I knew, too, that the following officers of North Carolina Mutual – Messrs. C.C. Spaulding, President, W.J. Kennedy, Jr., Vice President Secretary of Durham and Vice President David C. Deans of Richmond, VA— were honorary members of the Executive Board, National Council BSA, which we were struggling for recognition. It was not until 1964 when Bill Clement was the chairperson of the black division that we were given district status, council executive board representation, etc. which we had been seeking for years. (R. Kelly Bryant Collection, Boy Scouts History of Integration folder)