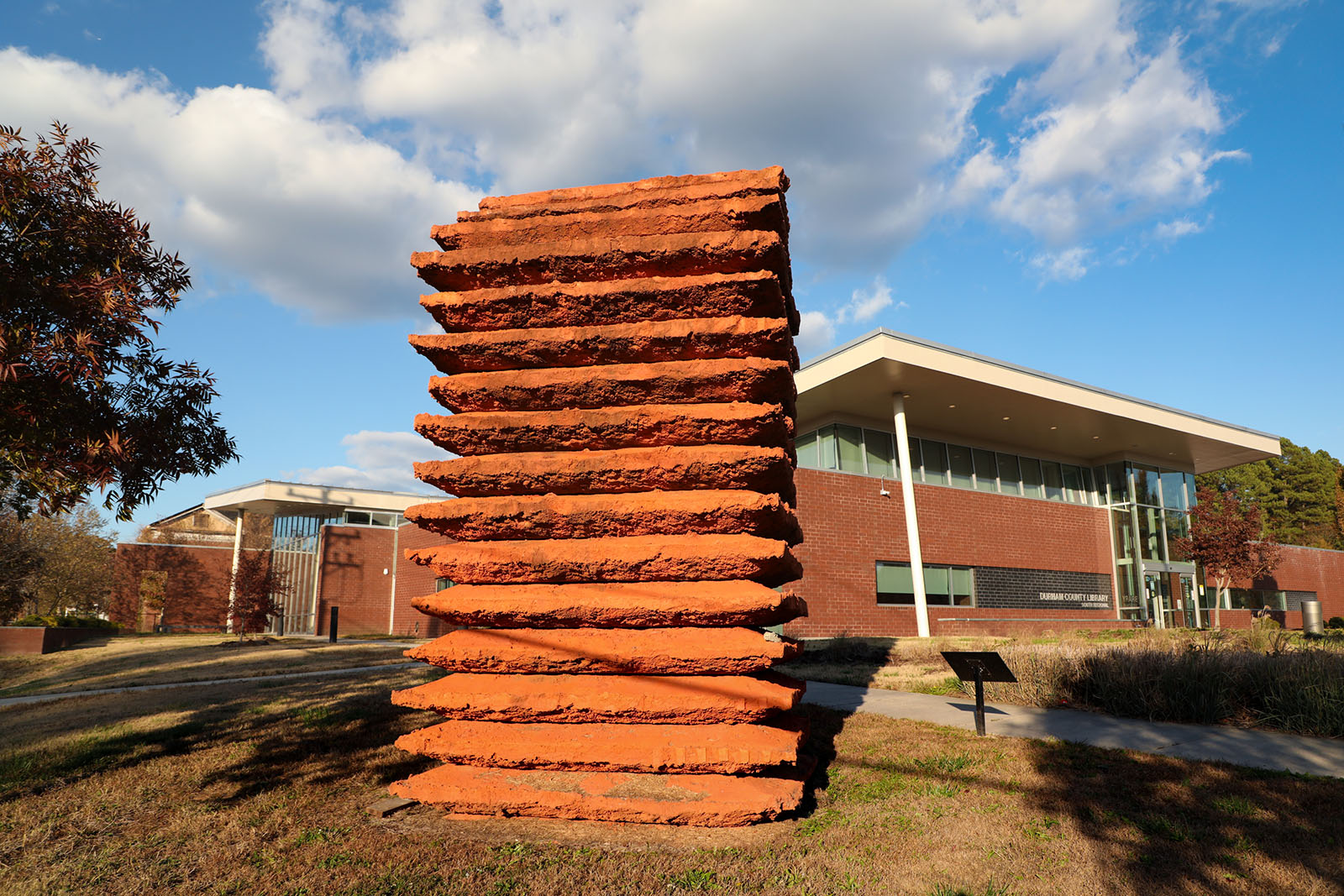 South Regional Library features a large outdoor art installation titled “Stephen’s Bent.” The piece is a large, earth-colored sculpture that honors the history of the site where South Regional is located.

The public art for the South Regional Library consists of a single, large, stacked form reminiscent of familiar log-built agricultural structures. At roughly 17 feet out of the ground and 8 feet by 9 feet, the sculpture is composed of stacked earthcast “slabs” that taper at the outside edges to create deep shadow lines and visually lighten the mass of the piece. The horizontal elements are individually cast of steel reinforced concrete in dug North Carolina “red” clay molds and thereby are visually connected to the land of Durham County — the Lowe’s Grove community, in particular, and its long agricultural history.

Titled “Stephen’s Bent,” the sculpture intentionally makes overt the connection to Stephen Lowe, the 18th-century patriarch of the Lowe family for whom the area (Lowe’s Grove) is named. A mason by trade, the piece refers specifically to an early structure built on what is now County land where the library stands. This early structure was a one-room school which speaks loudly of the Lowe’s Grove community’s commitment to education and which established on the land the first of many educational buildings of which South Regional Library is most recent. The word “Bent” refers to tobacco barn parlance in which a bent is a “room,” or subdivision of a tobacco barn containing a certain number of tobacco “sticks” holding tobacco leaves for drying.

The location of the piece on the site connects to both the vehicular audience traveling north and south on Alston Avenue as well as the visitors of the library who primarily come and go via the parking lot to the south. The sculpture is designed to be part of the overall library landscape composition, but also appear to have its own space and its own geometry similar to tobacco barns in large agricultural fields.

South Regional Library replaces the Parkwood Library that closed in June 2010. To unite the old community with the new, the concrete slabs were cast in earth containing soil from both Parkwood and the new Lowe’s Grove site.

Thomas Sayre has designed and built public art projects all over the world and has been part of the design team for civic, educational, and museum buildings. He, along with architect Steve Schuster, is a founding principal of the Raleigh-based design firm, Clearscapes. He has collaborated to produce lighting, furniture, terrazzo floors, and specialty surfaces.

Growing up in the shadow of Washington National Cathedral, Thomas’s early art education, and his love and respect of natural materials, came from the stonecutters and the Cathedral. His education continued at St. Albans School, University of North Carolina, University of Michigan, and Cranbrook Academy of Art.

While occasionally producing “studio” pieces, most of his efforts are focused in the public arena. It is here where the idea of producing art intersects with the realities of life. The art will work only when disparate opinions come together through collaboration to form a coherent vision.

Mr. Sayre continues to work actively as a sculptor with commissioned work in various collections spanning between Boston; Sacramento; San Francisco; Colorado; Tucson; Perth, Australia; Istanbul, Turkey; and Hong Kong. He has exhibited his work in a number of private galleries, as well as the North Carolina Museum of Art, the St. John’s Museum, the Waterworks Gallery, and the Southeastern Center for Contemporary Art.

Stephen’s Bent was made possible by a generous donation from the C. M. Herndon Foundation to Durham Library Foundation.

The artwork is in memory and honor of Mary D. Herndon.