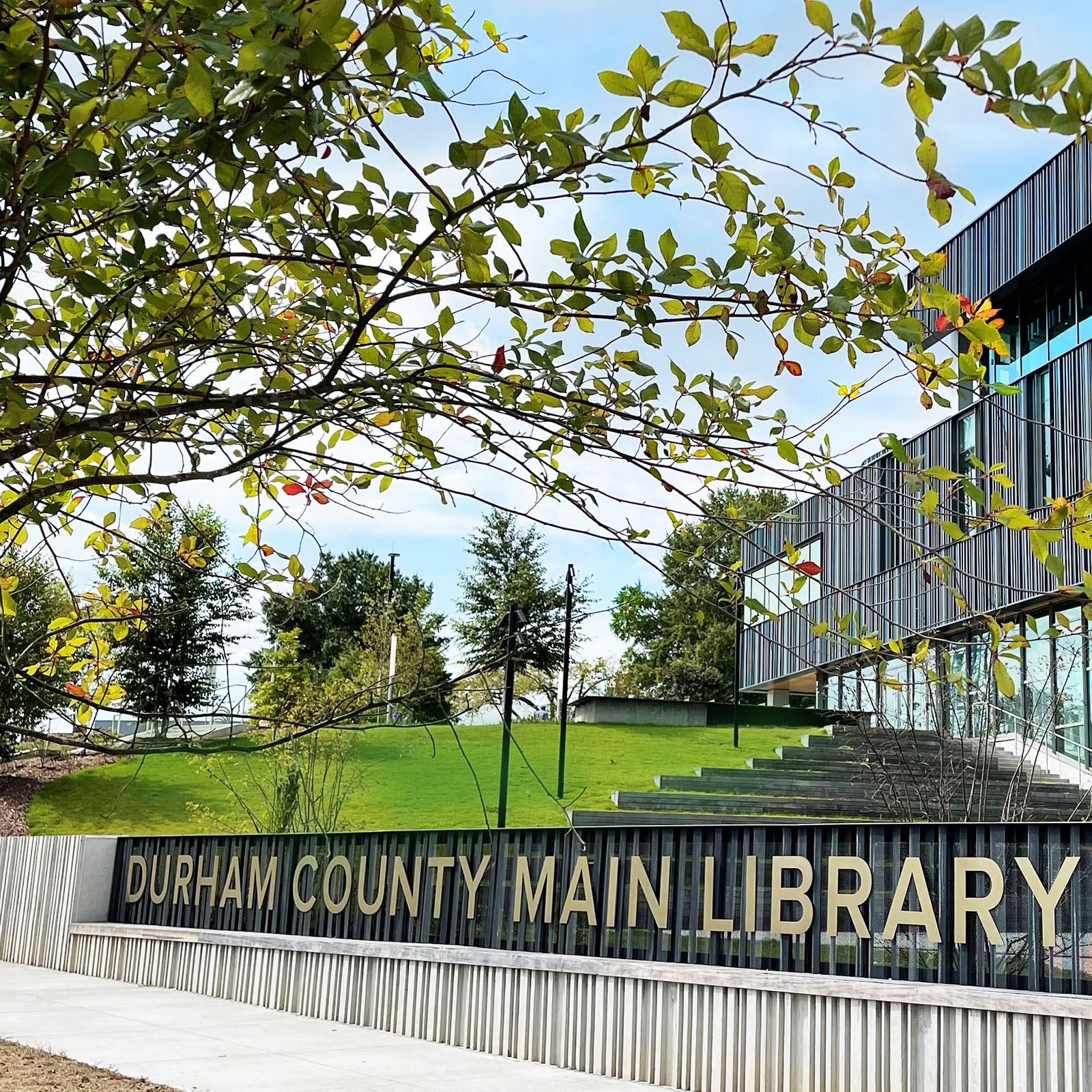 Near the Liberty Street entrance. Main's bike racks are architectural - look for the metal loops coming up from the sidewalk.

Check out some of the spaces and features inside this location before you visit.

No events found. Check for future events like this > or See all events 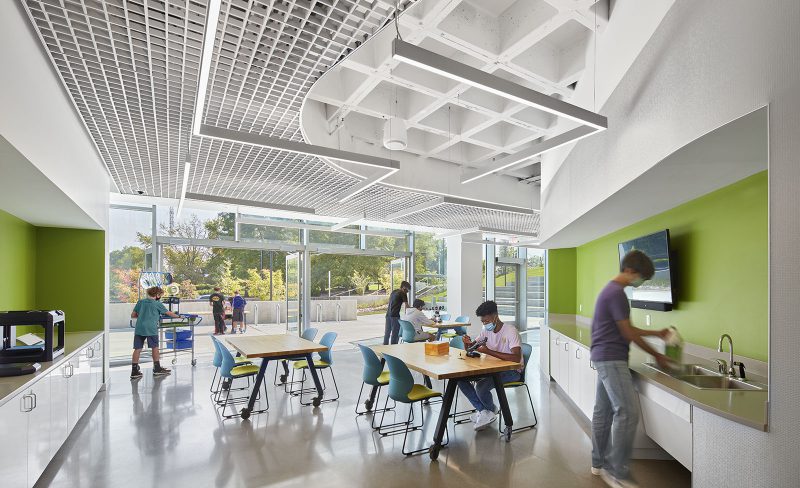 A place for all youth to explore and create in various physical and digital fields. Come here for 3D printing and modeling, coding, robotics, digital design, and more! *** 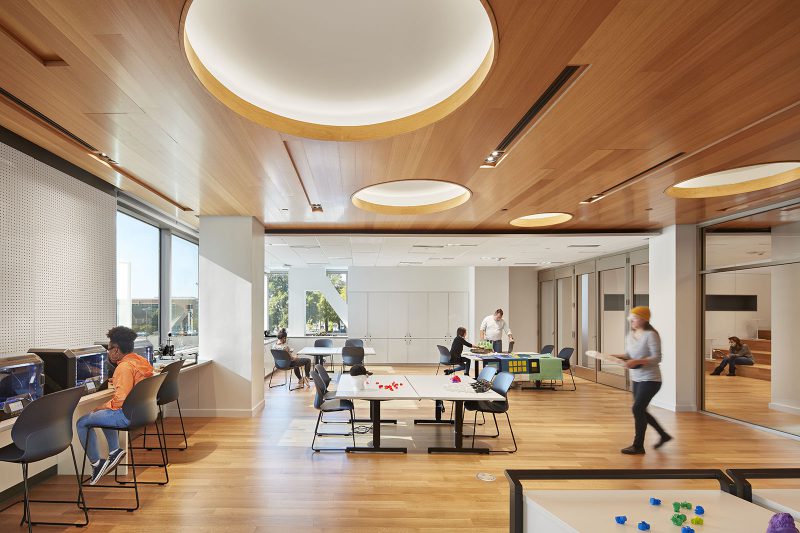 A place for adults and older youth to explore and create in various physical and digital fields. Come here for 3D printing and modeling, laser cutting, coding, robotics, digital design, and more! ***

A specialized space that lets you control and manipulate aspects of the world around you, including light, sound, smell, and touch. Reserve your time online to use the space.

A quiet respite removed from the rest of the library. With open access during public hours, this room is available whenever you need a space to take a breath. It features calming equipment and furniture to create a quiet environment for a variety of sensory needs. 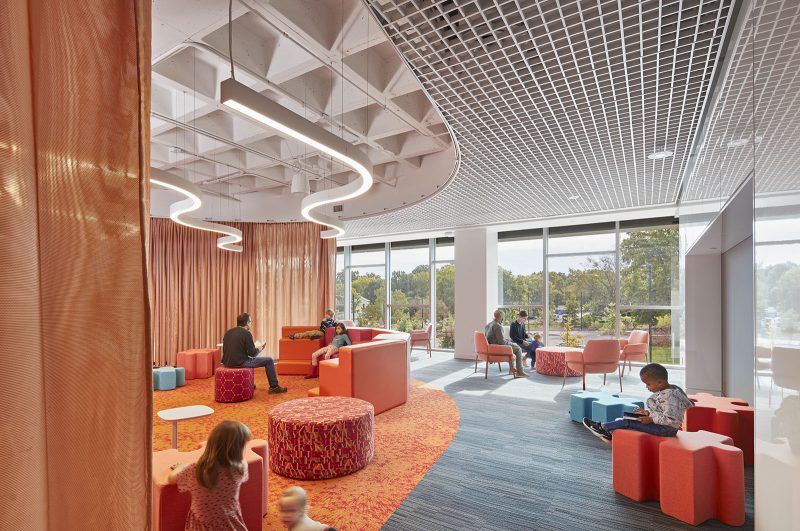 Catch storytimes, craft programs, and more in this fun and cozy space just for kids. *** 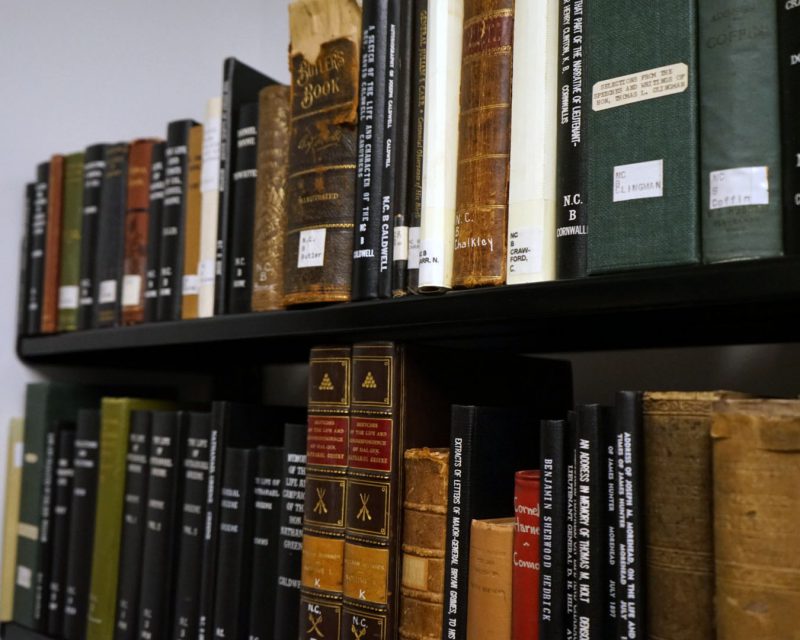 A unique archive of materials related to the history of Durham city and county. 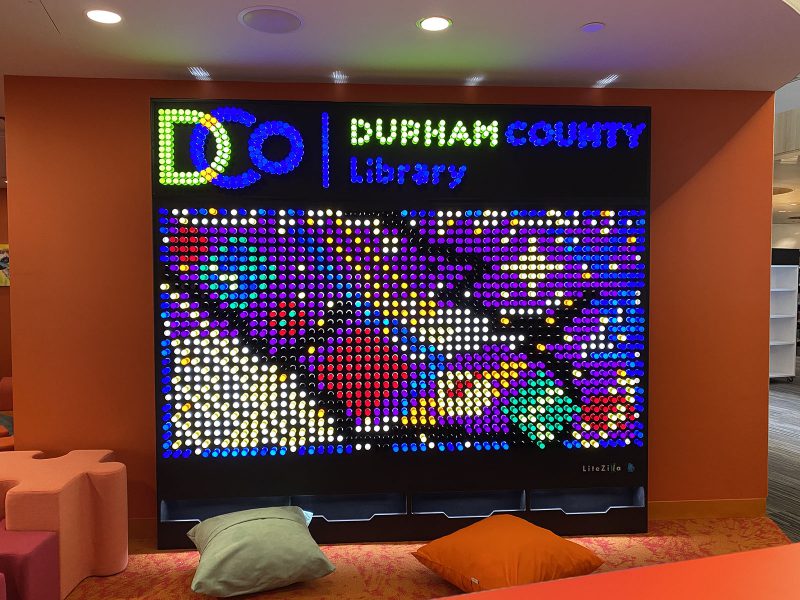 Found in the children’s area on the first floor, this space features an 8-foot-by-6-foot light wall, a magnetic tile wall, and other tactile play elements. 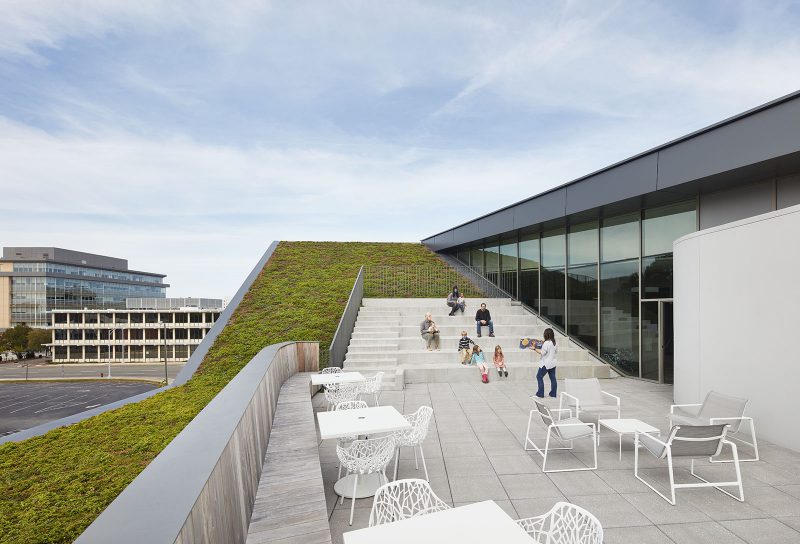 Take in views of downtown Durham from the large outdoor rooftop terrace. Open for programming and other events. *** 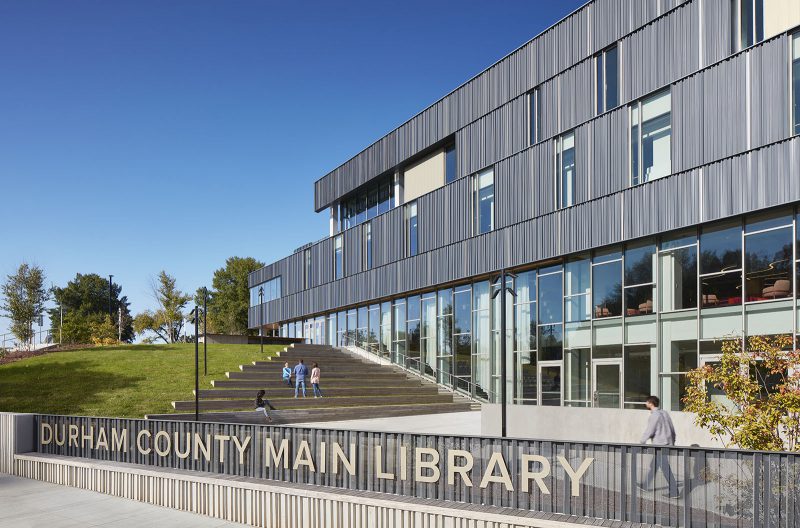 A lovely space to sit, read, and enjoy the great outdoors! You can also catch library programming and events here. *** 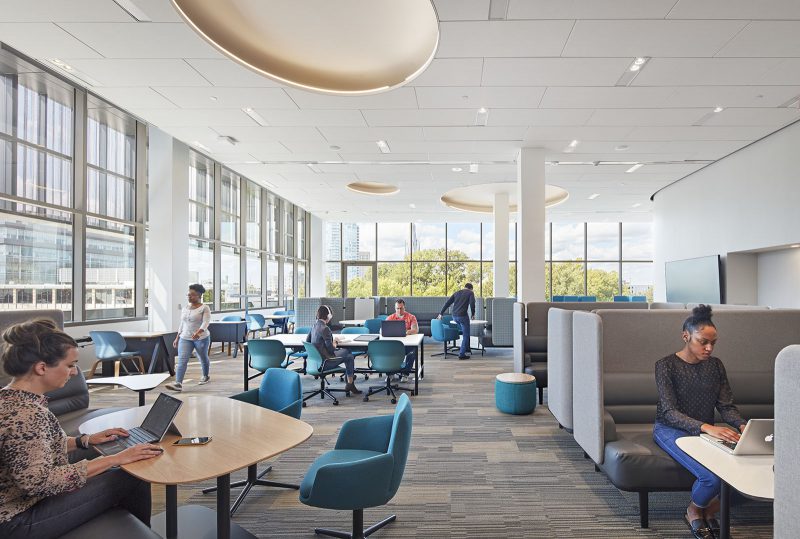 Space dedicated to small businesses in the Bull City and contributing to the entrepreneurial ecosphere of the city. Part of our business services offerings. *** 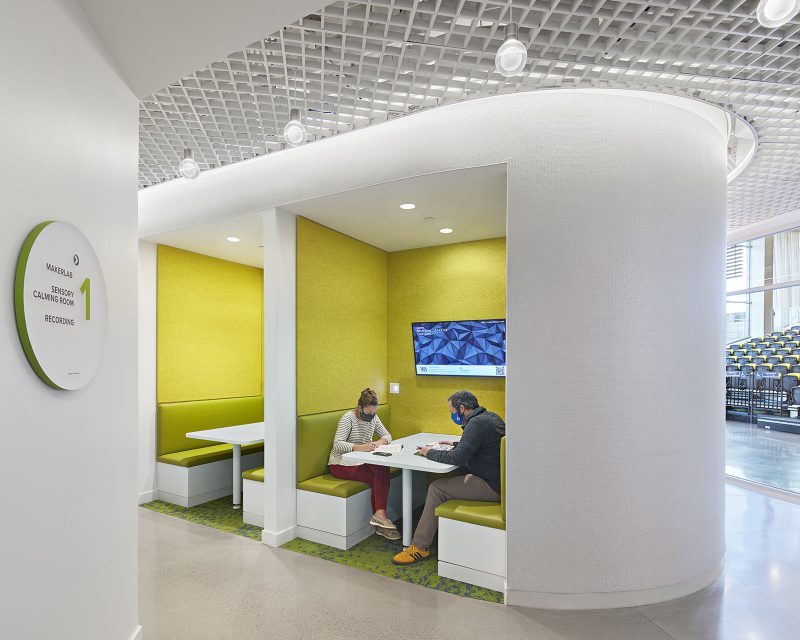 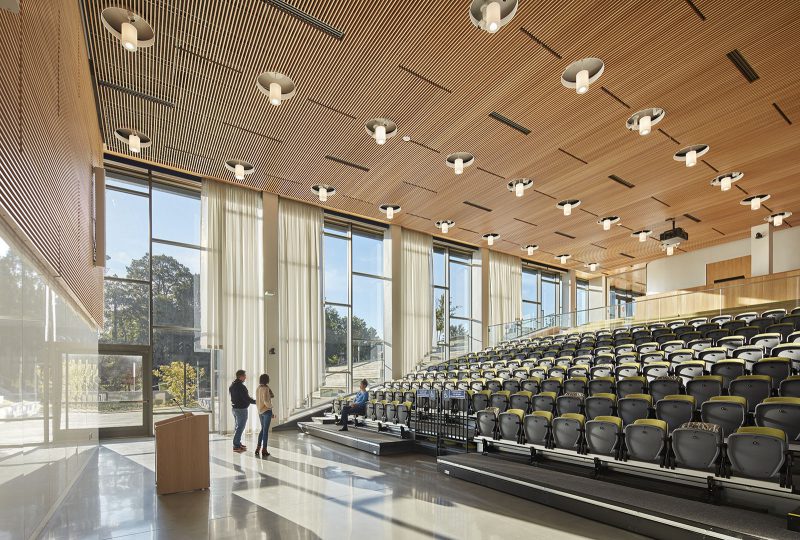 Catch a library program in this inspiring space. ***

A variety of assistive technologies including tools and software - see the full list of what's available. 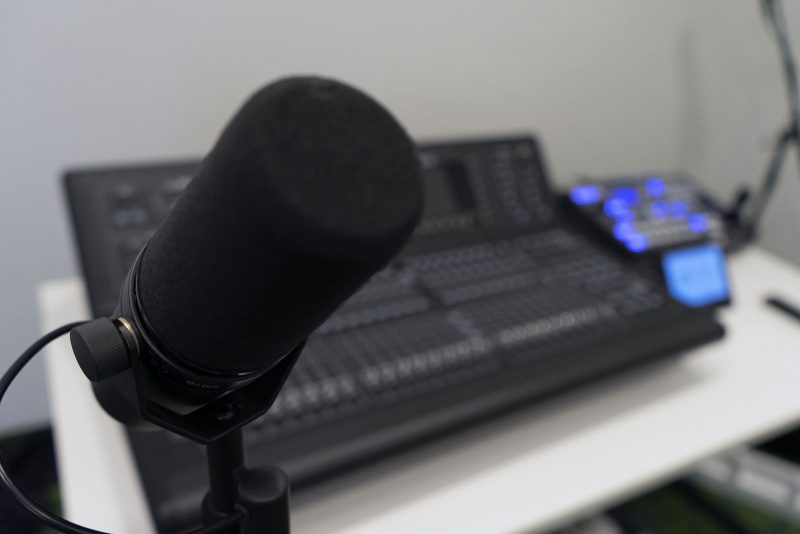 Use this space for podcasting, recording music, or editing videos. You'll need to attend a training session before booking the studio. 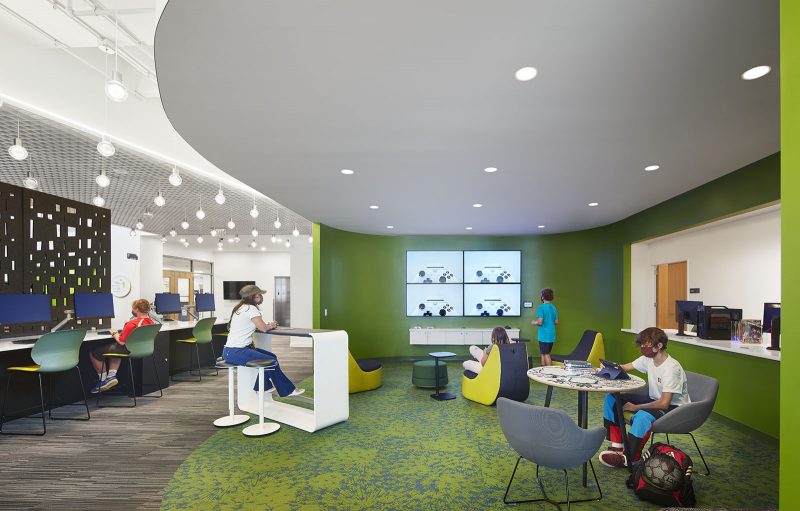 Xbox, Playstation, and more. Join us for a program, or sign up for a time to play on your own. *** 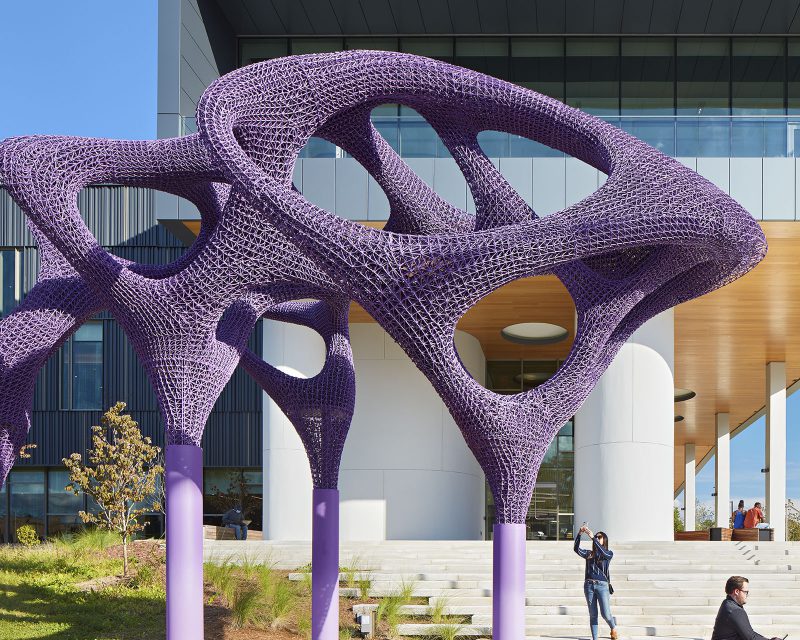 The public artwork in front of Main Library, Purple S.T.E.A.M. is a 17-foot-tall 3D printed sculpture. ***

The current Main Library is the latest in a series of flagship libraries for the Durham County Library system, each on the cutting edge of library services for its time. Durham’s first public library opened in Five Points in 1898. It was the first free, tax-supported library in North Carolina. The library quickly outgrew its original building, and in 1921, it moved to a new building on Main Street, funded by a grant from the Carnegie Corporation. Throughout the next decades, the library’s offerings evolved with the start of bookmobile service (another North Carolina first), the addition of a children’s reading room, and the opening of branch libraries. The collection continued growing throughout this time, and by the 1960s, the library had outgrown its building again.

In 1966, the library, which had been segregated up until that point, merged with the Stanford L. Warren Library to create a new integrated system. After the merger, a series of bond referendums to fund a new main library for the system failed. In 1976, voters approved a bond for the construction of a new library in downtown Durham. Ground broke for the project on Roxboro Road in 1979, and the new Main Library opened in 1980. The new building increased the library’s space from 5,000 square feet to 65,000 square feet. It included a children’s room, an audio visual room, and the North Carolina Collection.

By the 2000s, the community’s needs had evolved again, and Main Library was in need of renovation to keep up. Thanks to the community passing a bond referendum in 2016, Main was closed for a complete transformation in January of 2017. During the renovation, the existing building was taken down to the studs and foundation and completely transformed. The design, by Vines Architecture, won the NOMA Phil Freelon Professional Design Award and the AIA NC Merit Award. The building went from roughly 65,000 square feet to close to 100,000 square feet and from 3 floors to 4 floors. The renovation added specialized spaces and expanded the library’s capacity for community programming and events. The renovated Main Library will be a community-centered space for learning and innovation for years to come.

Claudia was born and grew up in Los Angeles, California. She received her undergraduate degree from UNCG in communication studies and her M.L.S. from NCCU. Claudia has been a librarian with Durham County since 2013. She started as Head of Circulation in Randolph County then moved on to Durham County as a Reference Librarian. Claudia is bilingual in Spanish and English. 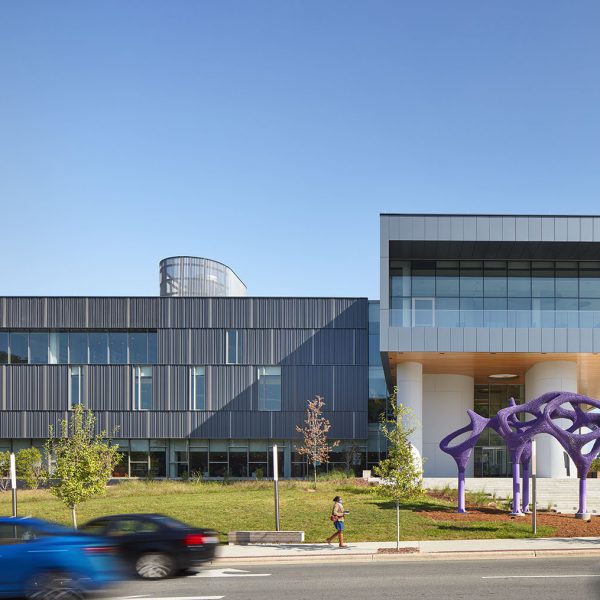 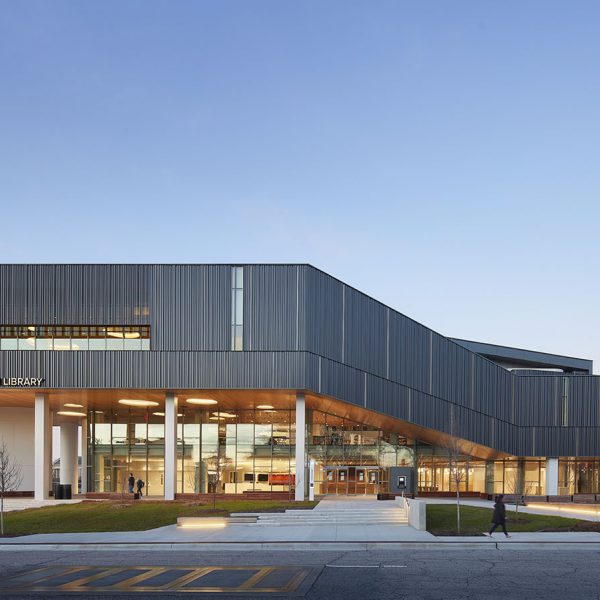 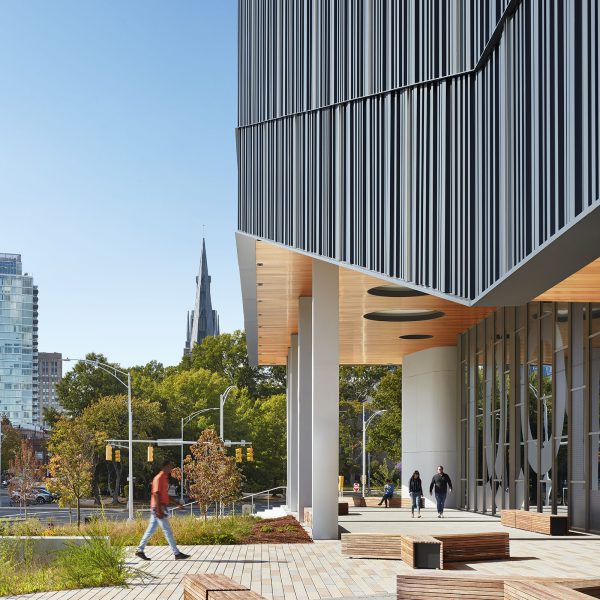 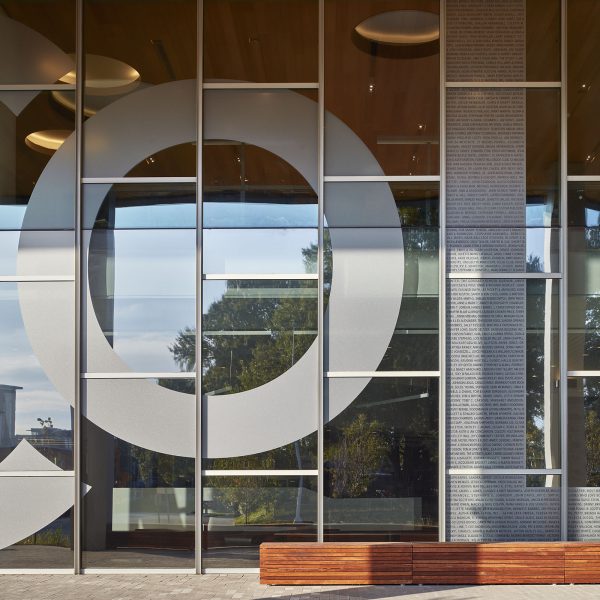 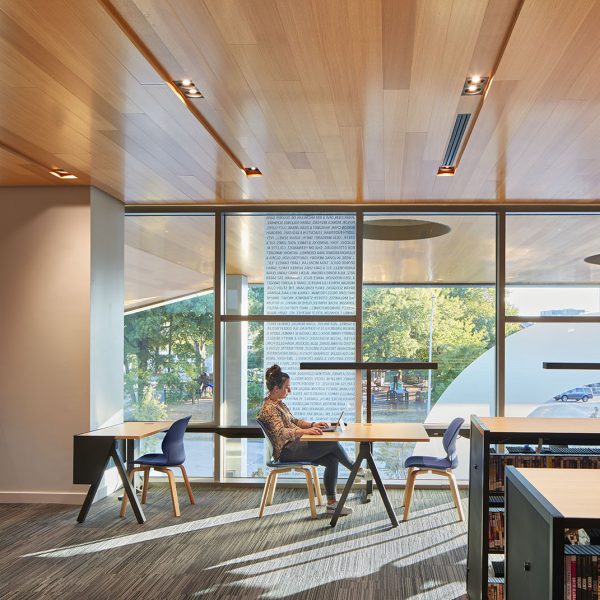 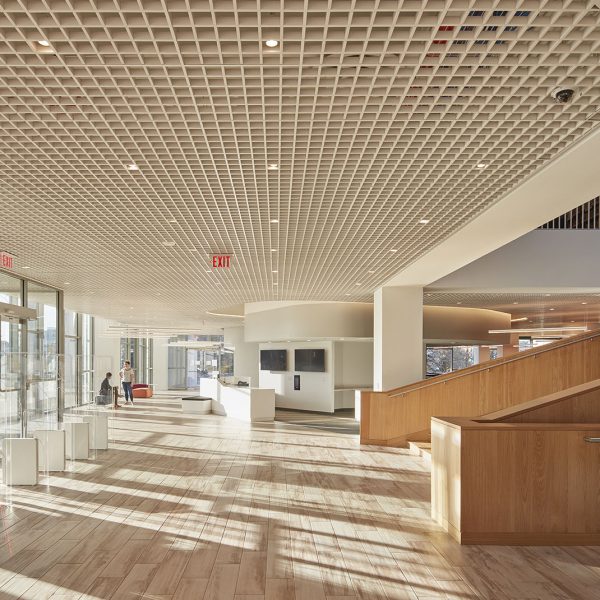 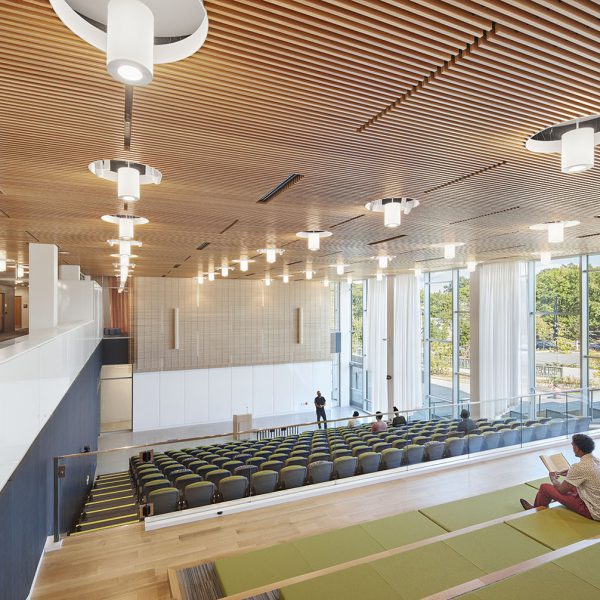 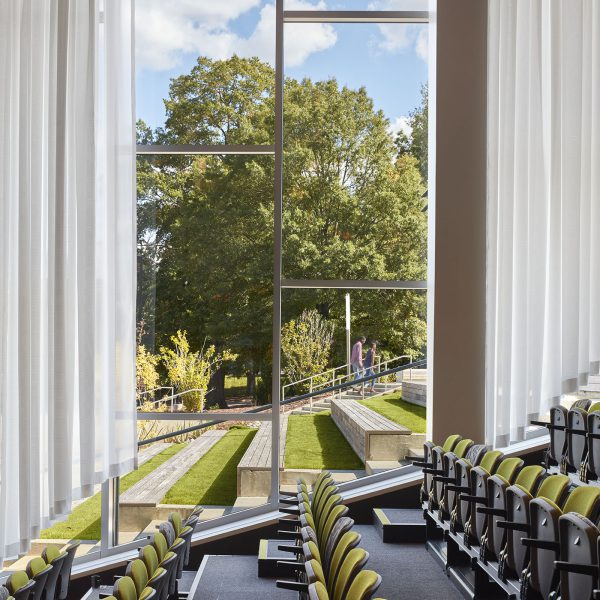 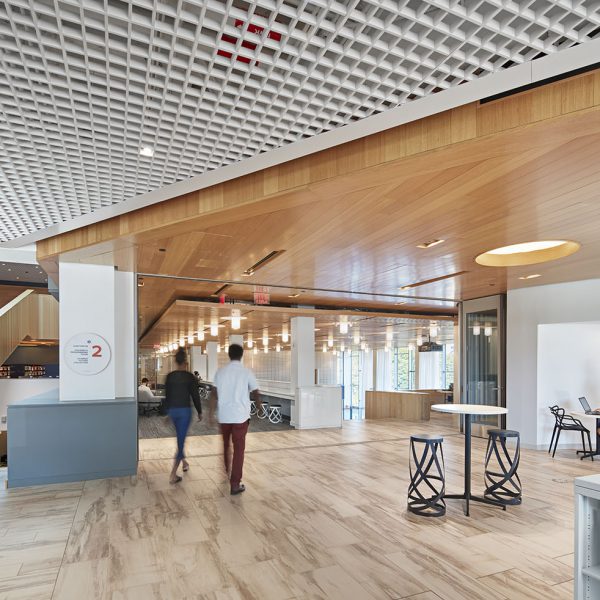 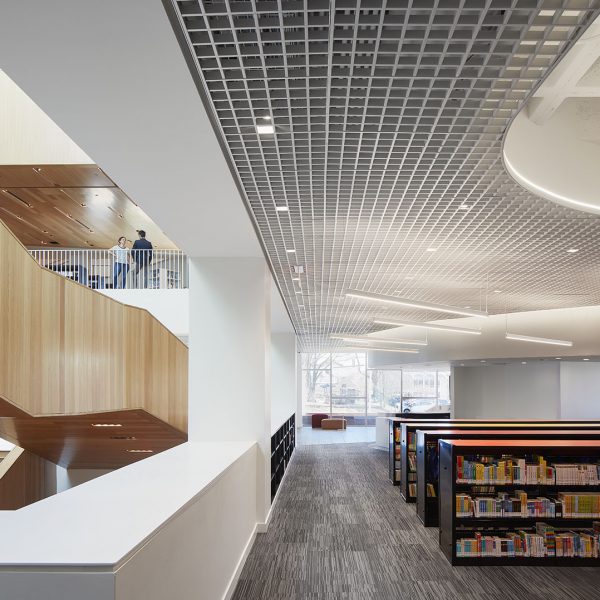 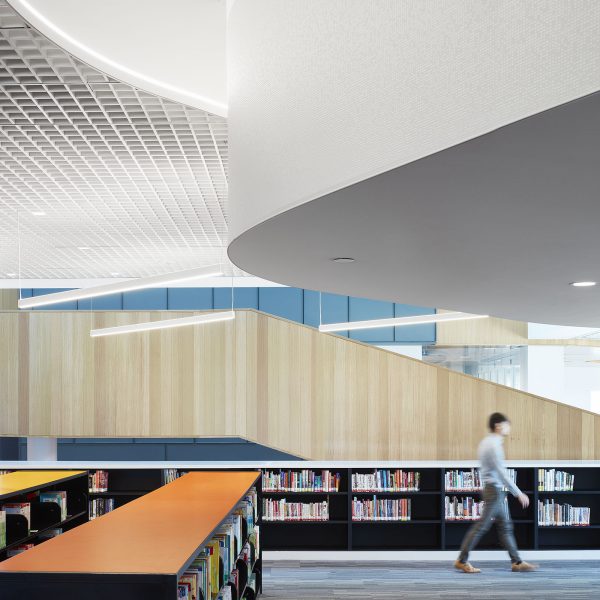 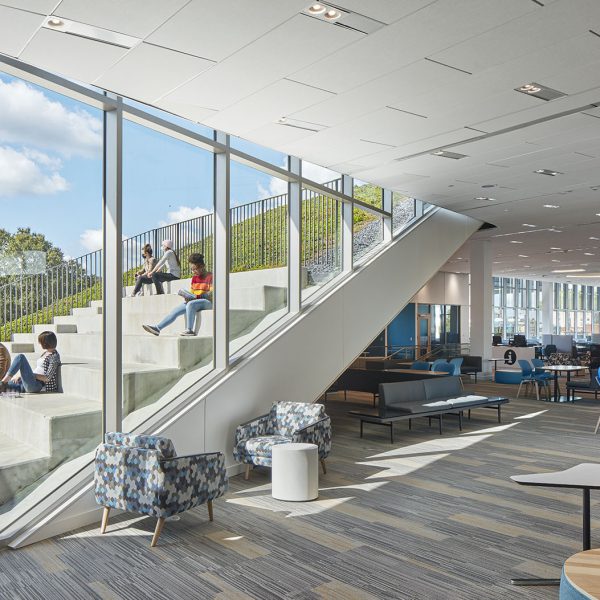 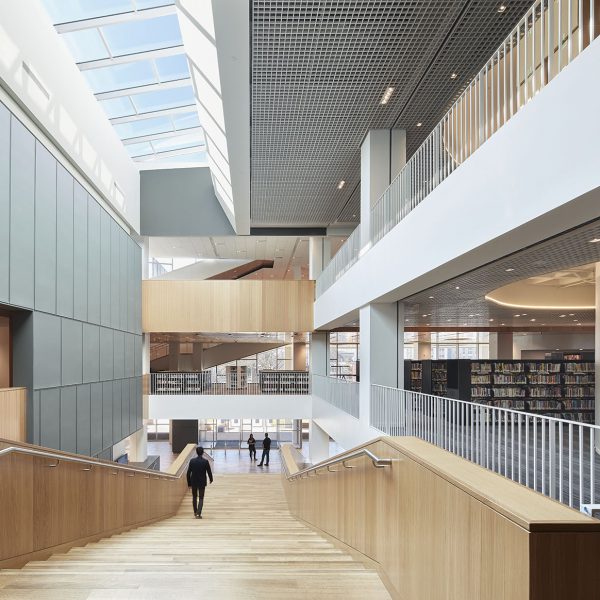 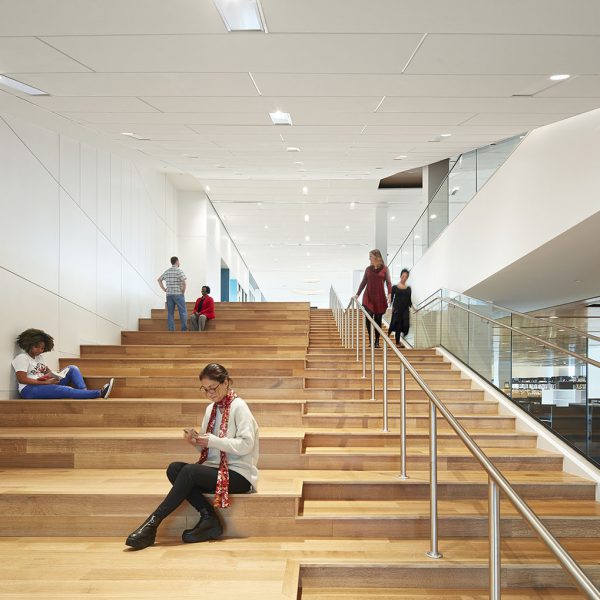 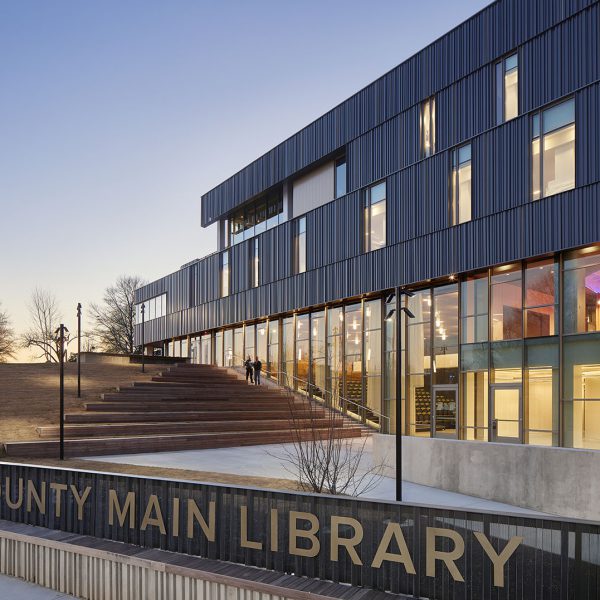